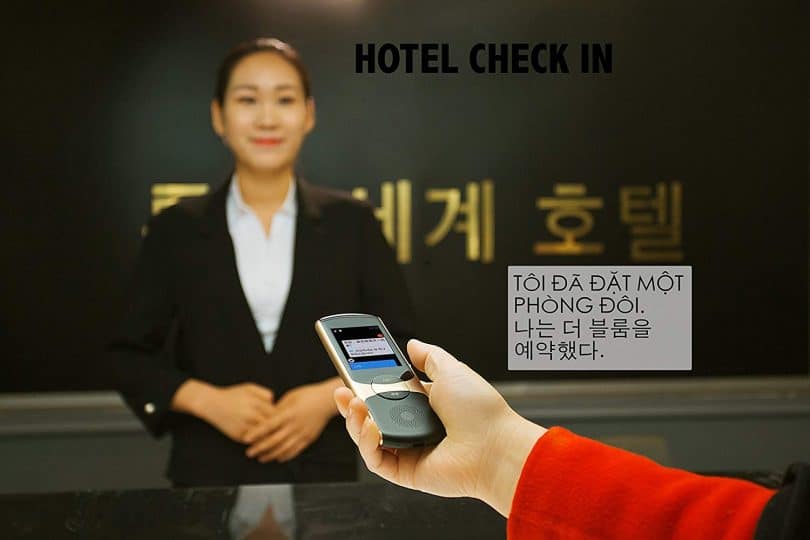 Share1
Tweet
Share
Pin21
Share
22 Shares
If you are thinking about visiting a foreign country, then there is no doubt that you are worried about whether it will be successful. Will they understand my language? Will I understand what they are saying? If these questions are running through your mind, then it’s time to stop basing it all on your hypothesis and assumptions and get a language translating device for yourself.

Getting the best language translator on our flooded market won’t be easy for anyone but lucky for you we have reviewed for you the best ten language translating devices in the market at the moment. We hope that this article will be very helpful to you.

List of Best Language Translating Devices on the Market

If you are looking to migrate to another country and you need to find a perfect way to communicate with the locals. Look no further as the Pocketalk Language Translator will serve you best. With a two-way translation technology, you can now be able to visit over 100 countries and communicate easily as this device will do the translation.

This translator is fitted with up to 74 languages including all the top languages especially in Europe and Asia. You don’t have to worry about WIFI connection or keeping your mobile hotspot, or as it has a built-in data connection system, hence it can rely on its self. Don’t beat yourself up if you can’t afford yourself a direct translator as the Pocketalk will be a good traveling companion. 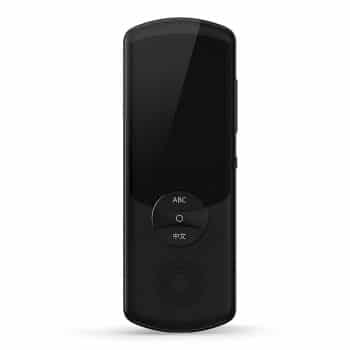 Have you ever visited a foreign country and see how difficult it is especially when you can’t communicate with the locals because of the language barrier? Well, you don’t have to encounter that kind of a problem anymore with the introduction of iFLYTEK Easy translator.

With this language translating system, you can travel to most countries without having to struggle with the language. It covers up to 30 languages throughout the world. It supports translation modes such as dialogue, photo, and human translation. It also provides English lessons orally and also internet connectivity. For this translator to work, you don’t even require to be online as it can work offline. 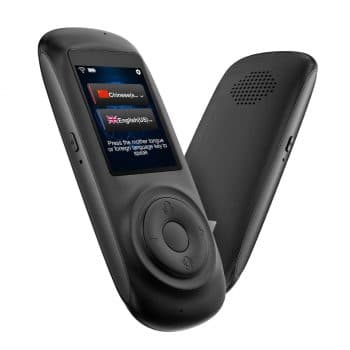 The MORTENTR Translator is one of the high speed translating devices in the market at the moment. It has a two-way translating technology with up to 70 languages of translation. When you are communicating with someone using this device, both languages can translate directly to one language. For instance, you can set it English-Italian and English-Spanish.

It is built with noise clearing sensors to take your voice even in noisy environments. When you are speaking too long sentences, it may be a little slow but as you move on it automatically peaks up the speed of your conversation. You can use WIFI or 4g sim cards for data connections, and once the link is through then, you are in for real-time translation. 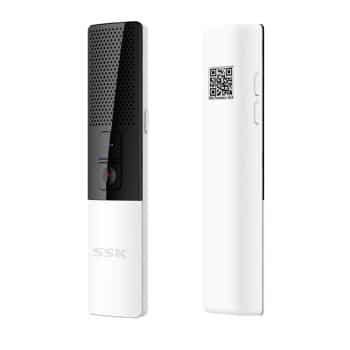 Are you thinking of visiting foreign countries which you don’t share languages? You can still make your trip a success with the SSK Smart language translator. With accurate and instantaneous translation this device can translate up o 85 languages throughout the world.

This device is very easy to operate as it has an android app which you will download and install it to your Smartphone where you will be able to operate it fully from there using Bluetooth. It has a two-way translation process where the source language and the target language can both change to other languages. This translator is an ideal choice especially to business people or linguistic workers. 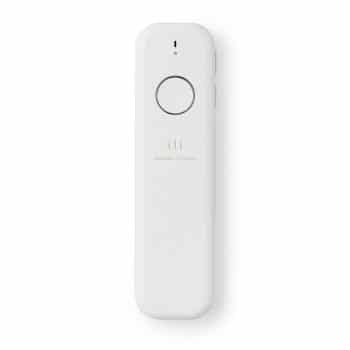 Previously produced language translators needed WIFI connection to work; with the ILI-instant Offline Language translator, you don’t require any WIFI connection which is an ideal choice especially when you are visiting areas that not have any network connectivity. With a one way translation, it allows for quick communication and while it helps you dine and navigate quickly.

This translator can translate into three languages; English to Spanish, Chinese and Japanese but not the other way around. With just a mere weight it is easy to carry around, in fact, it can just fit into your pocket as your phone and with just three languages to translate to it is generally fast.

Are you looking for a translator device with advanced features? Then, you cannot go wrong with the Travis Touch Smart Translator. This device can translate 150 languages more than other translators. It has two-translation which allow it to translate what you speak and also the reply of your partner.

On top of that, it features a large 2.4 Inch screen on which it displays the written translation. This device connects to Wi-Fi connection and comes with a high-speed 4G SIM card which is pre-loaded with 1GB of free data. Any time there is no internet connection available; the Travis translator has a built offline translation mechanism. Furthermore, you can use this device as a router to connect other devices to the internet with just one SIM card. Lastly, you can easily place a new language with Travis Smart Translator. 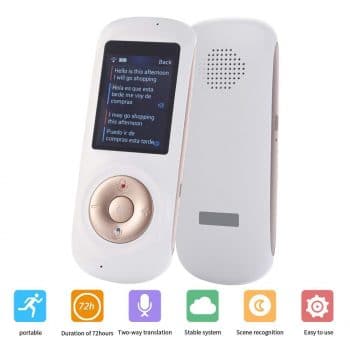 You don’t have to master foreign languages just so you can have a successful foreign trip, with this Instant Voice Translating device things have a little chance on turning down on you. It gives you a two-way language translation service which only requires you to connect it to WIFI or a 4G connection for it to function.

It is also uniquely designed such that when it is audibly translating something, it displays the translation on the screen. This comes in handy especially to people who have poor listening skills as well as bringing a good understanding to the parties involved. This device can also be used as a learning device to learn new languages 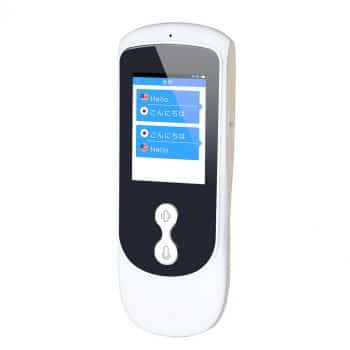 If you are searching for the best language translator device that can assist you in communicating with most regions and countries around the world then, the AOJA Voice Translator Device is best choice for you. This machine features multi-core processor that enables fast and accurate translation. It is straightforward to use compared to other devices. It also allows you to connect it to a mobile hotspot or WIFI connection.

This translator comes with a large 2.4-inch screen which clearly displays the translation results for easy learning and communication of foreign languages. In addition to that, it has a built-in noise device that accurately captures the voice in a noisy environment. This translator also comes with a long life battery which you can use for 12 hours. 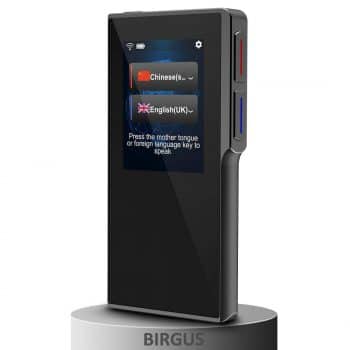 If you are planning to travel to a foreign country, then the language barrier will always be a concern. Live up to this concern by purchasing the Birgus Smart voice Translator as your travel companion. It can support over 70 languages all over the world. It has a two-way translating system. It is also equipped with high sensitive listening and speaking devices for high-quality translation.

For this device to work it only requires a WIFI or hot spot connection. This means that as soon as you are connected, you are in for a real-time translation. It is also designed with a touch screen which works hand in hand with the audio translator. When the device is giving out audio translation, the translated information also appears on the screen. This works perfectly especially to those people with poor listening skills as it will aid them with written translation.

This is without a doubt one of the best language translating device. It has a very lightweight and is very small in size making it convenient for portability as it can even be pocket carried. It is a two-way translator with the ability to translate over 50 languages.

It has high sensitive listening devices which pick up the speakers voice regardless of the background noise. It’s speaking devices are also clear and loud enough. It is connected to a smartphone via blue tooth for remote control. This device can also be used as a learning device to learn foreign languages and their proper pronunciation.

How to choose the best voice translator device- Buyer’s Guide

With many devices being available in the market, it is important to find one that meets your needs especially the language of the country you are visiting. You should also consider some other important factors such as lasting batteries, stand by hours and also working hours.

We hope that after going through our reviews, you are now in a good position to purchase a proper language translator which will give you your desired services.